Time and again either corpses of oil-contaminated birds are found along the German North Sea coast or pollution is directly observed in certain coastal areas. Observed chronic pollution does mostly not correlate with recorded ship accidents but is caused by illegal oil dumping such as tank washing or the disposal of bilge water, for instance. Any discharge of oil into the North Sea including oil dumping from ships is strictly prohibited. The amount of illegally spilled oil is difficult to estimate as discharges often go undetected by aerial surveillance.

Tracer simulations for an Assessment of Risk Exposure

Illegal oil spills occur mainly along the major shipping routes. To what extent (if at all) a given pollution affects coastal areas depends on winds and currents prevailing at the time of the event. The data base coastDat contains a detailed description of winds and currents for the North Sea region during past decades. This information may conveniently be used for a simulation of drift paths of hypothetical oil slicks assumed to be released in any regions of interest. Performing many of such simulations allows for a general assessment of the exposure of the German coast to chronic oil pollution and how this exposure varies in time and between different coastal areas. A large number of simulations covering the whole spectrum of realistic environmental conditions was performed using the particle tracking module PELETS-2D. PELETS 2D 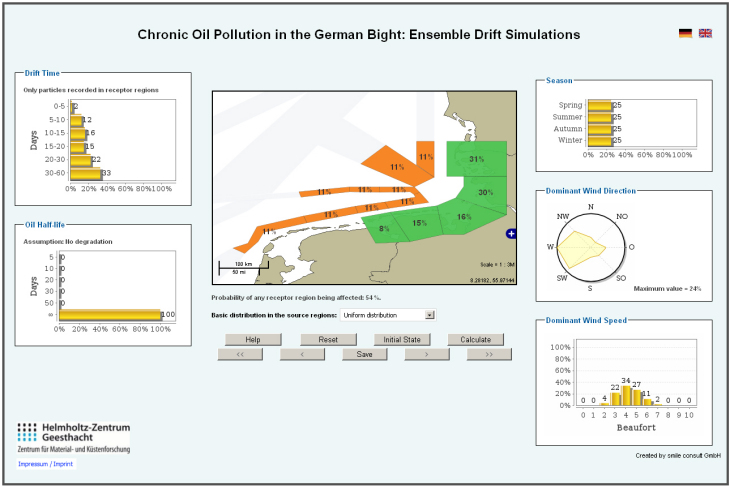 Graphical User Interface for the Assessment of Risk Exposure

A realistic drift statistics for the southern North Sea was established for the period 1958-2003. Assuming a constant frequency of illegal oil releases, a large number of simulations (hypothetical oil spills) at different locations was initialized with constant time lags between them. The resulting set of simulations describes both the mean risk exposure of different coastal areas and corresponding variability. An interactive graphical user interface was developed that allows for an interactive exploration of how simulated results depend on parameters like location of the spill, wind direction, wind speed, season of the year, or assumed half-life of the hypothetical pollutant.

Simulations for the Southern North Sea 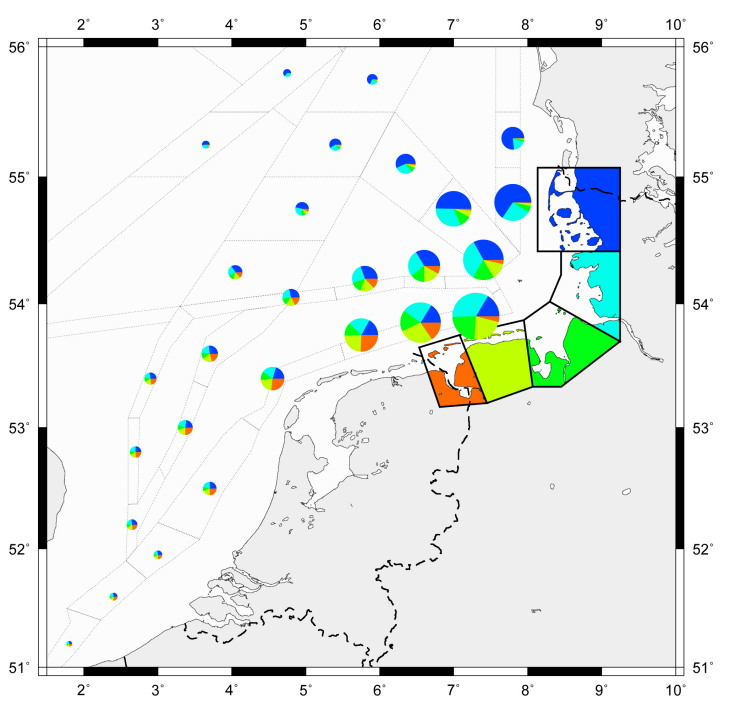 The figure on the right illustrates threats that emanate from hypothetical oil spills in different southern North Sea regions.

Relative sizes of circles represent relative probabilities of the German coast being affected by an assumed release at the respective location. Pie charts resolve the allocation of risks among the five colour coded coastal areas.

The graph does not take into account that the probability of occurrence of an oil release will generally depend on ship density. If the probability of illegal oil dumping is assumed to be proportional to ship density, the regions off the Dutch coast or near the English Channel gain in importance for the analysis. The distribution of risk among different coastal regions, however, remains independent of such an assumption.

More details about the scientific study the figure comes from can be found in the two publications listed below. Chrastansky and Callies, 2009, Chrastansky et al., 2009